Functionality of the Phoenix + MultiMode set-up was checked on a number of standard samples often used in AFM applications, particularly in Amplitude Modulation mode (also known as Tapping mode). The images recorded on ten different samples are presented below.

Visualization of DNA molecules on different substrate was one of the most exciting and pioneering AFM applications. Nowadays such measurements in the contact and AM modes are routine as illustrated by a couple of height images in Figure 1. Such applications have been also spread to studies of synthetic macromolecules in different geometries and conformations. One of the examples is given in Figure 2 where one sees multiple star-shaped brush macromolecules dispersed on a mica surface with Langmuir-Blodgett technique. 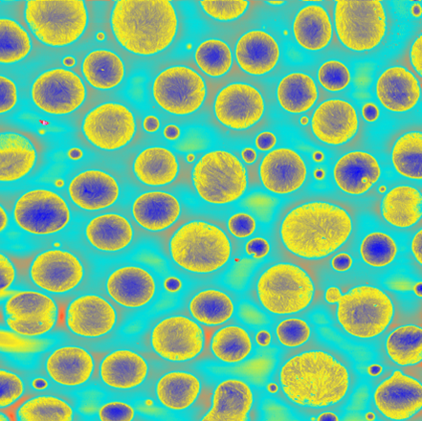 A combination of polymer lamellar structures and softer amorphous material is common for semi-crystalline polymer composition. The difference of local mechanical properties of these components allows their distinguishing in AFM images and for recognition of the semi-crystalline materials in blends with purely amorphous polymers. This application is demonstrated by height and phase images obtained on polymer blend of amorphous polystyrene (PS) and low-density polyethylene (LDPE), Figure 9.  Large-scale morphology of PS/LDPE film, which was obtained by a drop-casting of dilute solution of PS and LDPE in toluene on Si substrate, is characterized by smooth mesas surrounded by lower regions filled with multiple domains of smaller size. The height and phase images of a smaller location were obtained at higher tip-sample forces (low amplitude set-point) and the phase contrast helps in assigning the darker domains to PS and the polymer with thin lamellar structures embedded into amorphous material – to LDPE.

AFM capabilities in visualization of sub-10 nm structures are often checked in studies of layers of normal alkanes formed on graphite surface. At such surfaces the alkanes molecules are lying flat closely packed in lamellar structures whose width directly correlates with the extended alkane length and in some cases with a tilt of molecules inside the lamellae. One such sample, which was prepared by spreading of C60H122 alkane solution on HOPG (highly oriented pyrolytic graphite), has been examined with our set-up, Figure 7. The large-scale height image shows multiple lamellar blocks arranged on HOPG surface. The height and phase images at higher magnification show that at some locations the lamellar domains with spacing of ~7.5 nm are neighboring with patches of amorphous material. 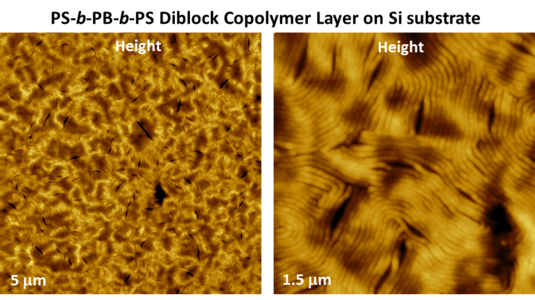 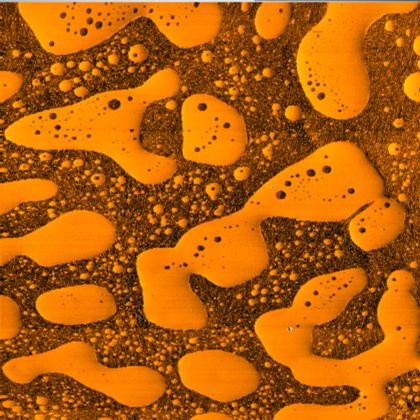 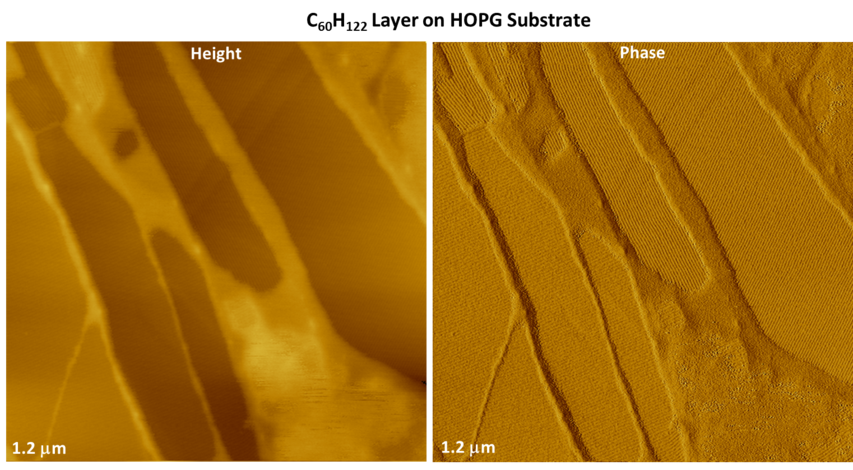 Ordered microporous morphology, which is prepared in polypropylene (PP) and polyethylene (PE) films by a combination of extension and annealing steps, is well documented in SEM and AFM images (Figure 5). The images reveal corrugated polymer topography with large surface area and pores content. The structural details, which show polymer fibrils with inter-fibrillar porous and close-packed lamellar regions, are best distinguished in AFM patterns. Such polymer membranes as PP or PP/PE/PP sheets are used as separators in lithium-ion batteries. Another type of membrane, which is made from nitrocellulose, is characterized by large surface corrugations in the range of hundreds of nanometers. One of such morphologies is shown in Figure 6, where height alternations up to 600 nm are well reproduced with regular AFM probes. For surface corrugations of several microns in size the high-aspect ratio AFM probes, such as single crystal diamond probes are required.

The power of AFM in imaging of polymer morphology at the sub-100 nm scale is proven in a large variety of studies of block copolymers, whose microphase-separated patterns are characterized by spacings in the 20-60 nm range.  For illustration of imaging of such samples, which are typically prepared by spin-casting of the polymer dilute solution on Si substrates, we are presenting the data obtained on polystyrene-block-poly(methyl methacrylate) – PS-b-PMMA (Figure 3) and triblock copolymer of polystyrene (PS) and polybutadiene (PB) – SBS (Figure 4).

Figure 9. Height and phase images of PS/LDPE film of Si substrate, which was prepared by drop casting of hot polymer solution in toluene. 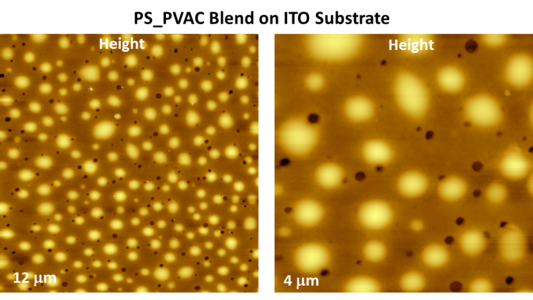 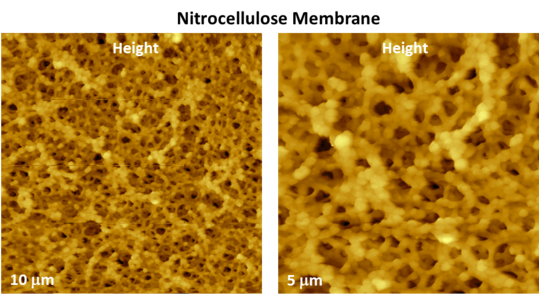 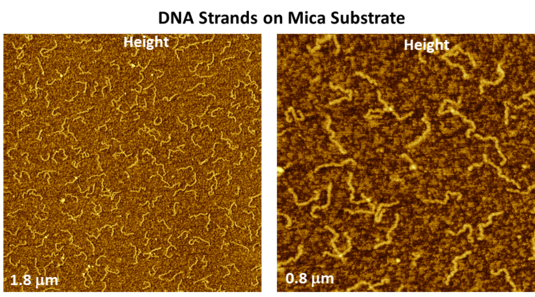 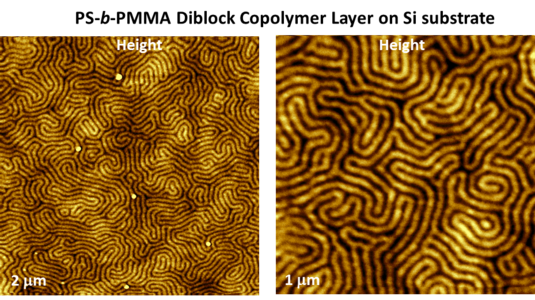 Lamellar domains with different orientation are observed in height and phase images of other sample location,  Figure 8. The domains were formed in adsorbate layers, which are closer to HOPG substrate. The raised  patches present amorphous material.

AFM images of two other binary polymer blends, which are composed of syndiotactic polystyrene – sPS and poly(vinyl difluoride) – PVDF  (sPS/PVDF) as well as from PS and poly(vinyl acetate) – PVAC (PS/PVAC), are presented in Figure 10 and Figure 11.  Both blends are made of immiscible polymers and their morphology reveals a phase separation on the micron scale. Morphology sPS/PVDF blend is characterized by depressed circular regions, which are surrounded by a raised matrix, Figure 10. The fine features of the circular regions, which are noticed in the height and phase images, can be assigned to lamellar structures of semicrystalline PVDF. The other blend component – sPS requires special conditions for crystallization and its surface forming the matrix is practically featureless.  The raised circular domains, which are noticed in height images of PS/PVAC blend, are enriched in PVAC, Figure 11. The matrix of this sample has mostly PS content. At room temperature these polymers exhibit no very different elastic modulus that makes difficult their recognition in phase images. However, PVAC have charged groups that lead to specific electric properties of this polymer and its differentiation from PS in images obtained in AFM-based electric modes.