Figure 6. PSD spectra, which were obtained for the same AFM probe with two different MultiMode heads.

The DCC operation is performed with specialized software, which guides the data collection, analysis and presentation of PSD and calculated parameters, Figure 7.  The PSD spectra can be saved in different formats including Excel. 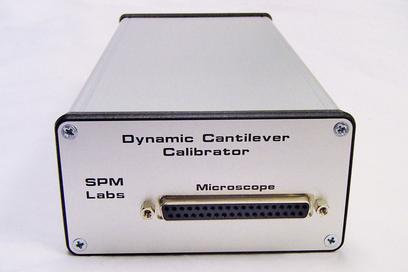 Figure 5. The relationships between IOS versus and the probe length. The PSD-based data for tip-less probe are shown on left. The PSD-based (blue rhombs) and DvZ-based (red squares) data for series of AFM probes of different length.

In the PSD spectrum of the probe the noise of OBD (in fm/√Hz) is evaluated by the level of the background. A comparison of the noise, which was obtained for the same probe with the regular and low-noise AFM heads of MultiMode microscope, is given in Figure 6.

Figure 3. The broadband PSD spectrum for soft AFM probe, which exhibits the peaks of 7 Eigen modes.

The use of the DCC for detection of the resonant frequencies of AFM probe in water is described by Figure 4. A comparison of the probe parameters in air and in water shows a drop of the flexural resonances and Q-factor caused by damping of the probe motion in a denser media. 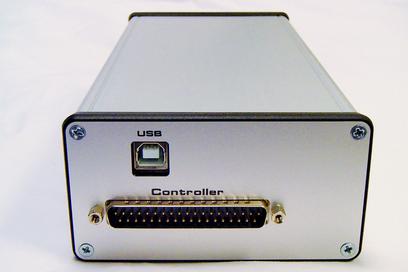 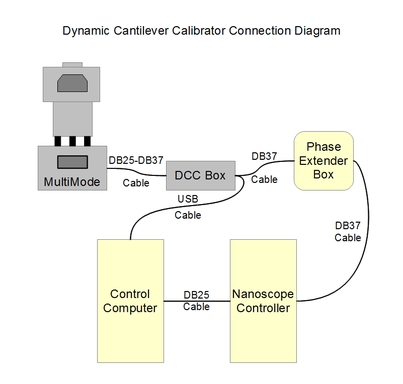 Many AFM developments are related with the use of higher flexural modes. Finding of different Eigen modes of an AFM probe is required for multi-frequency applications. This DCC function is illustrated in Figure 3. Seven Eigen modes of one AFM probe are shown in the PSD spectrum. 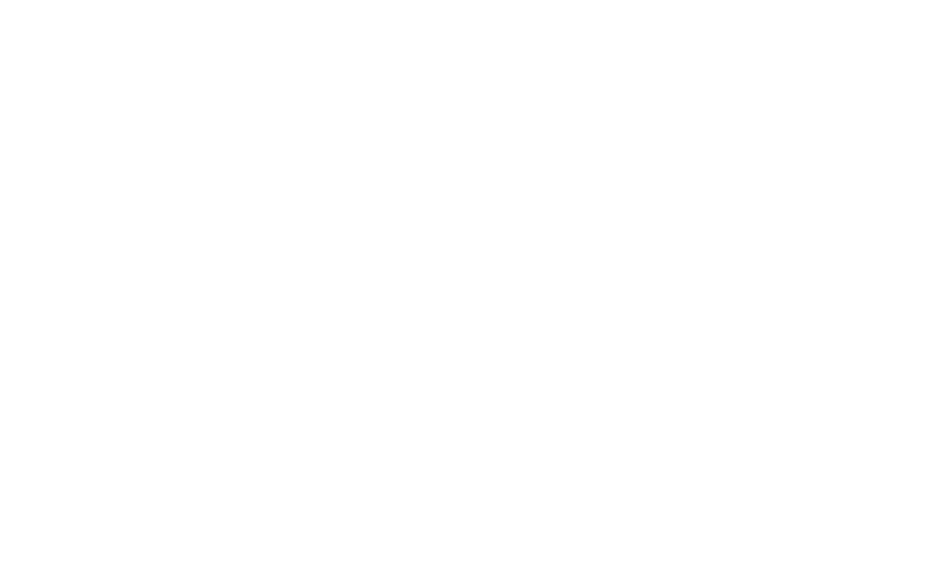 * MultiMode and Dimension are Trademarks of Bruker 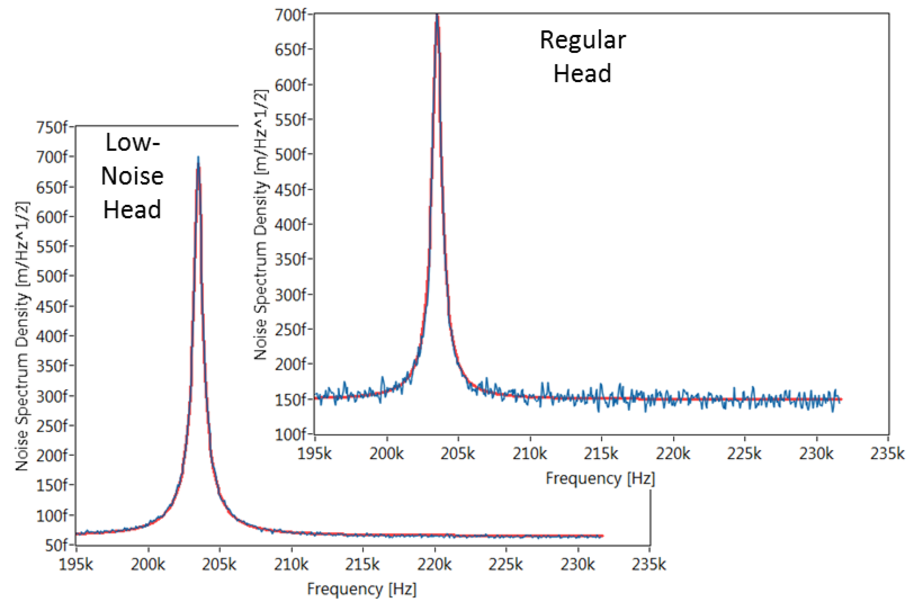 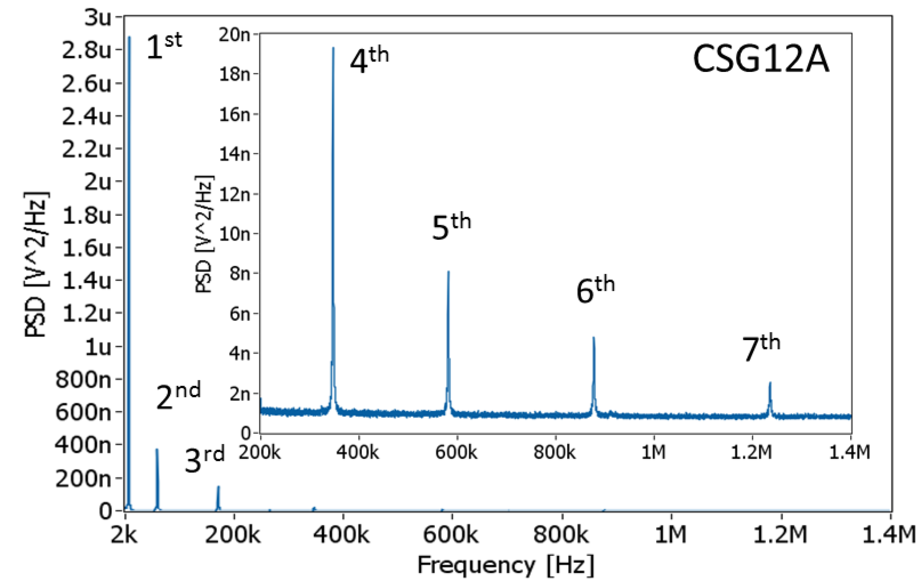 The optical deflection signal of the microscope is collected by the DCC and after analysis in the frequency domain it is presented as Power Spectral Density (PSD) or Noise Spectrum. The frequency range is extended up to 8 MHz to cover the spectral range of resonance frequencies of practically all AFM probes in use. Typically, the spectrum of a particular probe contains peaks, which are related to 1st, 2nd and 3rd and higher flexural resonances, Figures 2-3. The fit of 1st flexural resonance, to a Lorentz approximation, gives the resonant frequency and Q-factor of the probe. The practical realization of this fit is shown for two AFM probes (Figure 2). The spring constant of these probes are calculated with the Sader method, in which the probe geometry (length and width), its resonant frequency and Q-factor are used. This method does not require contact measurements of the optical sensitivity, which often leads to damage of the tip apex.

In the development of Atomic Force Microscopy (AFM) as a quantitative technique an important step is characterization of the properties of the AFM probe and microscope. To make this characterization easy we developed the Dynamic Cantilever Calibrator, which can be applied in combination with both the extended MultiMode*™ and Dimension*™ types of scanning probe microscopes manufactured at differently-named companies: Digital Instruments, Veeco Instruments and Bruker. These are the most popular scanning probe microscopes in the world, outnumbering all others.

The Dynamic Cantilever Calibrator (DCC) is an optimally designed accessory, which is connected in MultiMode (Dimension) Microscopes in series between the microscope and the Phase Extender Box. This accessory is shown in Figure 1 together with a scheme of its connection set-up with the microscopes and a list of technical specifications.

Figure 4. PSD spectra, which were obtained for the same AFM probe in air and in water.

Besides the cantilever parameters the analysis of PSD spectrum provides the estimations of Inverse Optical Sensitivity (IOS) and the level of noise of optical beam deflection (OBD). The value of IOS can be calculated from PSD spectra once we found the probe spring constant. The IOS magnitudes, which were found for several tip-less probes, directly correlate to the cantilever length as would be expected by theory, Figure 5, left. A comparison of IOS obtained from PSD spectra and deflection-versus-distance (DvZ) curves on a hard substrate, is given in Figure 5, right. The DvZ-based IOS values correlate with the cantilever length like the trend found for the tip-less probes.  The PSD- and DvZ-based IOS magnitudes are similar for the probes with length below 250 micron. For long and soft probes with tips, the PSD-based IOS values are slightly high, most likely, due to the tip mass that is not accounted for in the theoretical model.