Figure 3. The dependencies of the contact resonance frequency (left) and Q-factor (right) on elastic modulus of PDMS. 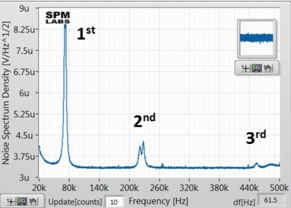 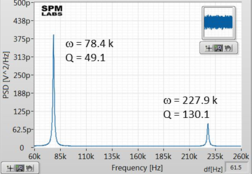 Case 4. Incomplete Alloy of Bismuth and Tin.
An expected advantage of the contact resonance studies is that a soft probe can be used for examination of hard materials [7]. This prediction was confirmed in study of BiSn alloy with the same probe (k = 30 N/m) used for soft materials. The images of the alloy at 7 um and 2.5 um areas reveal multiple domains with smooth and granular topography. This hints on their assignment of the dissimilar domains to different components of the alloy. Indeed, PSD spectra, which were recorded during scanning the smooth and granular surface areas, which are marked respectively with blue and red squares, exhibit different peak frequencies and Q-factors. A complex PSD graph, which was recorded on a large area comprising domains of both kinds, can be explained by an overlap of the PSD plots obtained on the individual domains. The smooth domains, where the frequency of contact resonance is higher, can be assigned to stiffer Sn (E~ 40 GPa) and the regions with granular morphology to Bi (E~ 30 GPa). 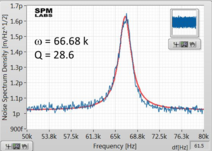 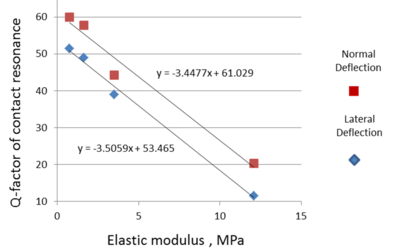 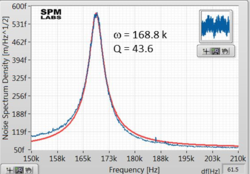 Figure 2. PSD spectra showing contact resonances, which were recorded on PDMS with different elastic moduli, for normal deflection (left) and for lateral deflection (right). A red trace in PSD graphs shows a Lorentz fit of the resonance. 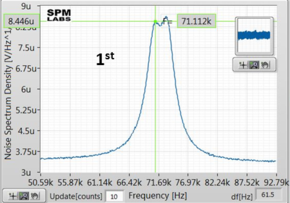 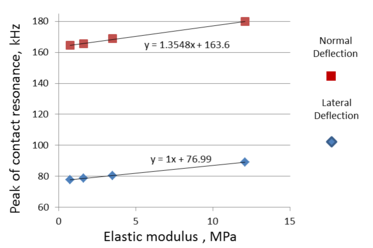 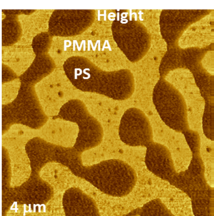 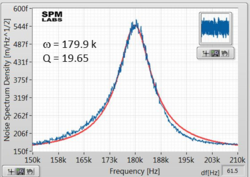 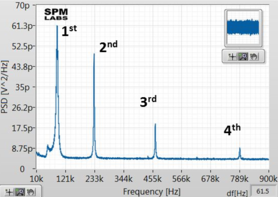 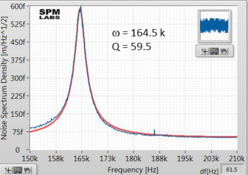 Case 3. Polystyrene/Poly(methyl methacrylate) Blend.
The contact resonance experiment was also performed on another polymer blend, which was prepared by mixing of 7 parts by weight of poly(methyl methacrylate) – PMMA and three parts by weight of PS. Height image of a thin film of 7PMMA/3PS shows another type of microphase-separated morphology, Figure 5. The assignment of raised and depressed surface regions, respectively, to PMMA and PS was revealed earlier by selective swelling of PMMA regions at high humidity. The contact resonance data were obtained during scanning the whole surface containing multiple PS and LDPE areas. The PSD in the 20 – 500 kHz range contains the contact resonances of 1st, 2nd and 3rd order. Other two PSD graphs show double peaks at 71.1 kHz and 72.6 kHz (2nd order) and double peaks at 221.4 kHz and 228 kHz (3rd order). It is quite unexpected that the contact resonances for these polymers are quite different because their elastic moduli are close to each other.

The correlations between elastic modulus of PDMS samples and the contact resonance frequency and Q-factor for the probe oscillations of 1st and 2nd order are shown in the graphs in Figure 3. The trends for the normal and lateral probe responses are quite similar as the resonances are shifted to higher frequencies and the Q-factor is smaller for the stiffer polymer films. The same tendency was found also for the contact resonances of 3rd and 4th order, which are not shown here. These data were recorded at the same probe force of 3 nN. As the probe force was gradually raised to 12 nN, the contact resonances for probe oscillations of 4 orders have shifted to higher frequencies with the larger shift observed for 1st order resonance. The behavior of Q-factor for the probe resonances of 4 orders was different as it became smaller at higher forces. These data will be helpful for understanding nature of the contact resonances recorded in PSD of the probe interacting with a sample and their relationship with material properties. 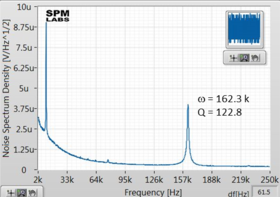 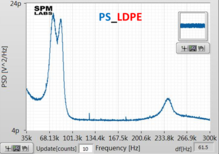 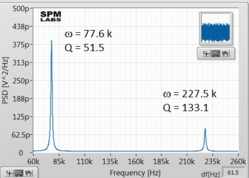 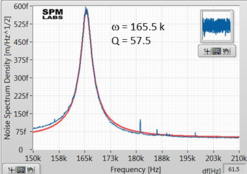 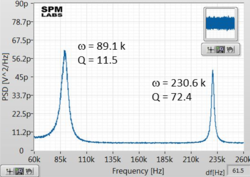 1. Introduction
Brownian motion induces minute movements of a resting probe of Atomic Force Microscopy (AFM) and this thermal noise is registered with a photodetector. The probe deflection time signal can be converted into frequency domain and presented as Power Density Spectrum (PSD), which contains multiple probe resonances stimulated by thermal motion. Analysis of amplitude peak at 1st flexural mode, which is defined by its resonant frequency (f) and quality factor (Q), is used for extraction of the probe spring constant as well as inverse optical sensitivity (IOS) and optical beam deflection (OBD) noise of the microscope [1, 2].

This is not the only valuable use of thermal tune in AFM and related techniques. Particularly, analysis of thermal noise of AFM probe, which was made of cantilever with a bead at its free end, was applied for monitoring hydrodynamic interactions of the probe with a solid surface. A drop and smoothening of the resonance peak was detected as the probe approached a sample [3]. In this and other experiments [4], the probe noise was measured in a narrow frequency range around 1st flexural mode at altered tip-sample separations prior to their contact. The analysis of this phenomenon in terms of simple harmonic oscillator was aimed at the use of frequency dependence of drag coefficient caused by hydrodynamic and viscoelastic memory. Recently, measurements of thermal noise of AFM probe staying in contact with a sample were used for recording the probe contact resonance [5] and applied for detection of sample heterogeneities. Regardless of low sensitivity of these studies, this approach is a useful alternative to contact resonance studies that use additional actuators [6-8]. The latter excite the probe or sample vibrations to facilitate a detection of the contact resonances. A coupling between the actuator excitation and the probe response is influenced by static and dynamic characteristics of their interfaces that complicate the measurements. This problem is avoided in the thermal noise studies.

2. Contact Resonance Studies with DCC accessory
The DCC provides sensitive registration of the probe thermal noise in a broad frequency range and this allows finding of the probe and microscope characteristics. Our accessory can be also used in applications that benefit from precise measurements of the probe resonances. One such application is the recording of contact resonance when the probe scans a sample in contact mode. Below, we present the studies of the contact resonance on different materials, which were performed with AFM NitraTall RB probe (AppNano). Such probes with Si3N4 cantilever and Si tip have spring constants in the 25 - 40 mN/m range. Our measurements were performed with a MultiMode AFM microscope, which is connected with Nanoscope IIIa controller. The DCC accessory, which was placed between the microscope and Phase Extender box, does not interfere with the microscope operations.  As our studies were carried out in contact mode, we avoided the use of a clamp of the probe holder that brings electric contacts to the holder. This eliminates a cross-talk between AFM signals in the cable disturbing thermal noise measurements [2]. The DCC studies were made for the probe resting above the sample (free state), and also after the probe had landed on a sample and scans it in contact mode. In most cases 500 accumulations of time deflection signal, which take ~30 sec, were enough for high-quality PSD graph showing the probe contact resonances of several orders.

3. Practical examples
In verification of contact resonance studies with the DCC accessory we performed a large number of measurements on samples of polymers, semiconductors, metals and bitumen. Several experiments made with NitraTall RB probe are discussed below. For free probe, PSD, which was recorded for normal deflection, shows five eigenmodes starting with the most pronounced 1st eigenmode at 10.5 kHz, Figure 1 (top left). In PSD of lateral deflection a pronounced resonance was found at 162.3 kHz, Figure 1 (top right). Besides this resonance, there are a couple of peaks of 1st and 2nd eigenmodes of normal deflection due to a small cross-talk between normal and lateral signals. 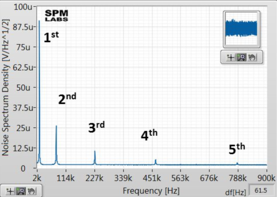 Case 1. PDMS with Different Elastic Modulus
The contact resonance studies were performed on PDMS films, which were prepared from polymers with different elastic modulus (E):  E = 0.74 MPa, E = 1.61 MPa, E = 3.48 MPa and E = 12.1 MPa. These films exhibit pure elastic deformation as judged by a perfect match of deflection-versus-distance loading and unloading curves. When the probe was scanned on a stiff PDMS film in contact mode PSD graphs, which were recorded for normal and lateral deflections, are shown in Figure 1, bottom. Four contact resonances, which correspond to eigenmodes of the free probe shifted to higher frequencies, were revealed in the normal deflection PSD. In lateral deflection PSD a pronounced resonance was detected at frequency 17 kHz higher than the lateral deflection resonance of the free probe. A comparison of PSD signals for normal and lateral deflections, which were recorded for PDMS samples with different E, reveals a straight correlation between the elastic modulus of the sample and the contact resonance frequency and Q-factor, Figure 2. In these measurements the applied force was kept at 3 nN.

Summary
A collection of PSD spectra recorded with the DCC while the probe scans different materials in contact mode undoubtedly illustrates a sensitivity of the contact resonances (normal and lateral deflections) to material nature. Quality of these spectra, which show multiple resonances in a broad frequency range, is good enough for mapping responses at the resonant frequencies, and the related compositional imaging is under development. 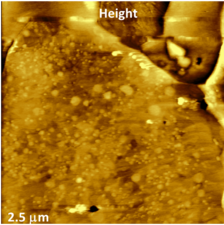 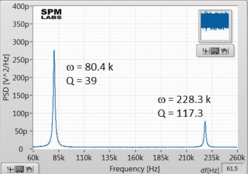 Case 2. Polystyrene/Low-Density Polyethylene Blend.
Height images of a thin film of polymer blend, which consists of equal parts of polystyrene (PS) and low-density polyethylene (LDPE), show a microphase-separated morphology, Figure 4. The raised domains with fine fibrillar or lamellar structures are common for semi-crystalline LDPE. PS - amorphous polymer without fine structures dominates in the matrix layer, which is spread on Si substrate. 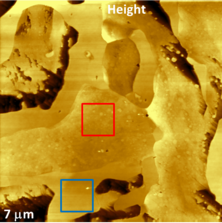 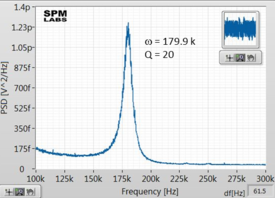 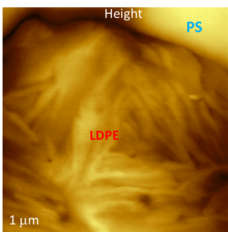 Figure 4. Height images (left) and PSD spectra (right) of PS/LDPE blend, which were obtained during scanning different sample locations (marked by the red and blue squares). 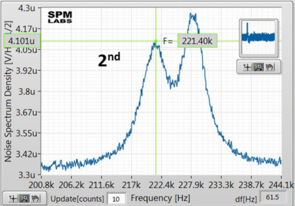 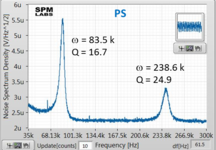 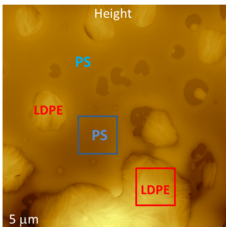